Here’s the short block for the Salt Racer Motor Mk11. It’ s been 18months since the unfortunate demise of Mk1 on the dyno 3 days before leaving for the 2016 event.

Bit of a late start with 6 months till the 2018 event, but not due to pure slackness – I’ve been delving into the world of combustion theory and engine simulation programs, not to mention building flowbenches and cam analysers. Using these tools, the heads and cam from Mk1 were analysed and this data was used in an engine simulation program to create a base line model which agrees with the dyno results of the Mk1 motor.

This base line virtual model was then ‘tuned’ to optimise power in the target range of 8000-8500RPM.  The simulation shows that the best case outcome with the 46/38mm intake/output valves and current port and chamber configuration is 110HP at the crank. But valve lift would need to be more than the 12.3mm that the Schleicher 340 produces  – at least 13.5-14mm. And more importantly, the intake tract flow would need to be increased by around 20%. This is not as easy as it sounds: Flow optimisation is a black art practiced by people with years of experience! I have some learnin to do..

The target valve lift can be achieved by either replacing the 340 cam with a higher lift cam or increasing the rocker ratio or a combination of both. I’m having a shot at designing some high ratio Skrunkrockers… stay tuned. 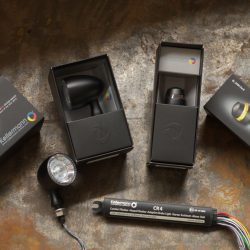