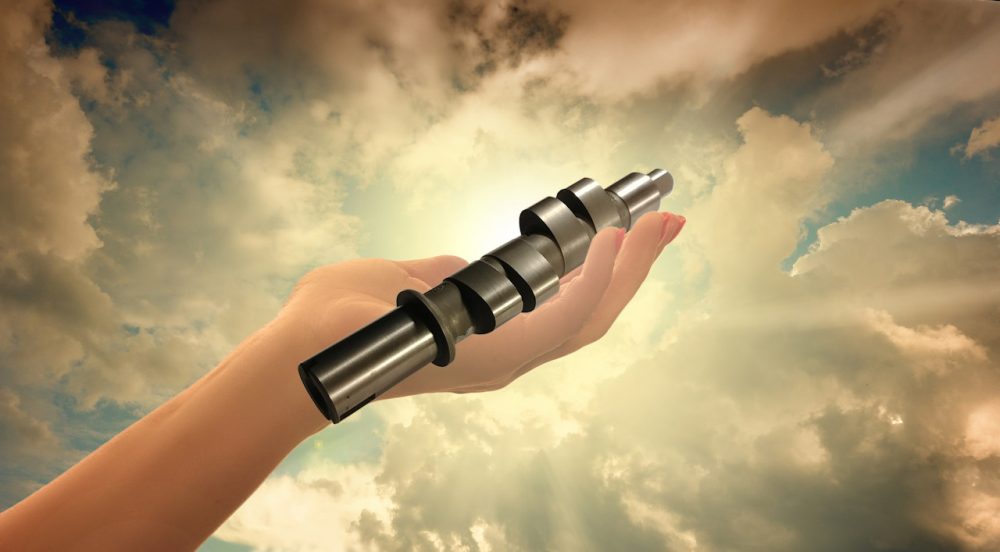 Within the cannon of Airhead religious thought, nought engenders more mystery than the holy bump-stick. I had chance to witness one spontaneously burst into flames. I really did. ‘It’s a miracle!’ I cried.

As the flames subsided, ecstasy gave way to the realisation that I was possessed of the Devil in the detail of yet another misleading cam specification.

To compare cam denominations is folly! They pray to different Gods who mete out judgment according to a confusing panoply of checking-height* scripture. Even within denominations, these scriptures can display great contradiction.

Encyclicals from the Church of Schleicher, for instance, proclaim that checking-heights exist at the end of cam lobe clearance ramps. Some of this denomination’s children share the same ramp and are therefore directly comparable. The others are orphaned in Limbo.

An Ecumenical movement has attempted to unify scripture across all denominations so the world’s rev-head flock may receive wisdom: A checking-height of 0.05” in the New World and 1mm in the Old. Sadly, in acts of religious arrogance, many denominations resist.

Therefore, a quest came upon this author: To collate all insights gleaned by the Skrunkwerks Bump-Stick Diviner into a Holy Ecumenical Cam Table under a Unitarian checking-height of 1mm. Let all Airhead disciples rejoice!

* Checking height is the cam or valve lift at which various cam charateristics and specifications (duration, valve opening and closing timing, overlap etc) are measured. Comparison between cams is made difficult if not impossible by a confusing array of proprietary checking heights based on various criteria. Worse, some manufacturers persist in publishing cam specifications without any mention of checking height rendering their specifications utterly worthless!

Ideal valve motion is to instantaneously slam the valve open,  leave it there for a prescribed period then instantaneously slam it shut. In other words, a valve lift ‘curve’ that is rectangular in shape – an impossibility in the real world unless you’re Christian Von Koenigsegg who gets darn close with his camless Freevalve System.

We in the cam driven world contend with lift curves the shape of mullock hills and quaintly proclaim a cam to be ‘aggressive’ as it’s lift curve vainly attempts an approach to anything that resembles a rectangle.

Note 1:  The sainted Harvey Crane was probably the first to quantify ‘aggression’ with his three measures of ‘Intensity’. These measure the difference in cam duration between two specified cam lifts. His ‘Major Intensity’ is stated in the table for each cam and is the difference in cam duration between cam lifts of 0.020″ and 0.050″ (0.51 – 1.27mm). The lower the number the more aggressive the cam. It’s not a bad measure of how aggressively a cam will accelerate off its clearance ramp into the opening flank but doesn’t provide such a clear picture of what might be happening above 0.050″. The KLD factor fills in that part of the story – see Note 3.

Note 2: Harvey’s ‘hydraulic intensity’ measured at cam lifts of 0.004″ and 0.05″ (0.10 – 1.27mm) is also included in the table as it considers more of the lash ramp in its calculation thereby giving some comparative idea of how fat and wide the ramps are.

Note 3:  Dr Gordon Blair’s KLD factor provides a broader overal picture of aggression. As illustrated in the pic below, it calculates the ratio of the actual lobe lift area to the ideal rectangular area thereby providing a means of comparing how a lift profile deviates from the ideal…which is generally considerable – most cams only make it a bit more than 50% of the way to the ideal as listed in the table. A relatively small difference in this ratio can amount to a noticable difference in engine behavior. It’s a useful metric in conjuction with the ‘Intensities’ per above. 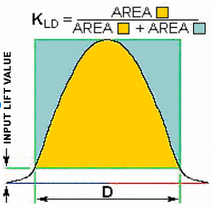 Note 4: The Schleicher numbering system is comprised of two parts: The numbers before the decimal point denote a particular lobe profile. Many of these profiles are used in cams across the Airhead model range regardless of displacement and might only differ in Lobe Separation Angle (‘LSA’ – the angle in cam degrees between the inlet and exhaust lobe centerlines) which is denoted by the numbers after the decimal point. e.g. Ro214.0, Ro214.5 and Ro214.10 have exactly the same exhaust and inlet lobes but LSA’s of 100, 105 and 110 degrees respectively.

While the lobes are the same, changing the LSA changes the valve event timings and the overlap angle. Everything else, including duration, lift, area etc remains the same.  All Schleicher airhead cams except for the Ro1145.1 (336) are timed ‘straight up’. That is, the centre line between the exhaust and inlet lobes co-incides with piston Top Dead Centre (TDC). i.e.: The inlet and exhaust valve events are symmetric about TDC as denoted, for example, by the typical form: 28/60/60/28

The Ro1145.1 is delivered with a key offset of three cam degrees which results in an advance of all valve events by six crankshaft degrees* to 36/64/76/24 at 1mm cam lift. If it were timed straight up like the rest of its brethren, its timings would be a symmetric looking 30/70/70/30.

* The camshaft turns at exactly half the rate of the crankshaft.

To give an idea of cam lobe shape, the following figure illustrates three cams that span a decent range of what can be achieved within the Airhead architecture starting with the stock 308 cam.  The drawings are to scale and specify the maximum cam lift for each case.

The first two are with the stock 22mm lifter. The lifter diameter limits the opening speed of a particular cam lobe which in turn plays a role in limiting a cam’s aggression and maximum lift*. The 8.87mm lift of the Schleicher 340 Racing cam is close to the maximum that can be achieved with the stock lifter. Beyond this, custom large diameter mushroom lifters are used or the more adventurous builders will  go for roller lifters with specially designed cams. Roller cams do not suffer the same speed restriction as flat tappet cams though they are acceleration limited – but that’s another story.. Their advantage is well illustrated below.

* The large cam lobe to lifter offset and small crown radius of the Airhead lifter are other factors that limit aggression and maximum lift. 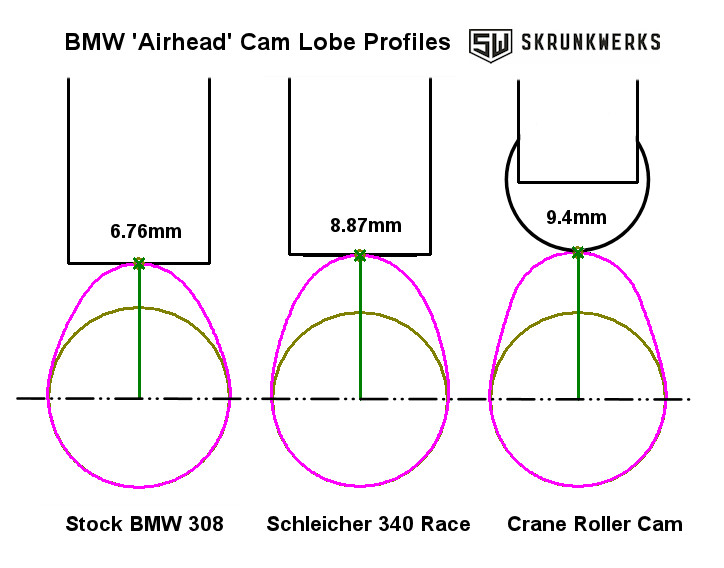 The Holy Cam Table is a continuing work of religious devotion for the benefit of all. As such it survives on alms. Please loan generously of cams not yet included in the Table (including those marked with a #) so that their secrets may be divined and disseminated to all. Shekels will be sent to cover postage. Cams will be promptly returned once communion with the Skrunkwerks Bump-Stick Diviner is complete.

Let us give thanks to the following Airhead disciples who have hitherto given generously:
Darren Craig
Rudi Gregor
Michel Schenk
Hans Poutsma

The Gospel of Airhead Torque

Our Profit, beloved of many and rightly so. Revered and beautifully mannered gentleman who never misses a sabbath visit to the Church of the Sacred Airhead. Gives generously of torque to those of mid, low, and higher RPM alike. Thus arose the Gospel of Airhead Torque.

New Testament mild sports cam. Sometimes speeds past the Church of the Sacred Airhead on the Sabbath but never forgets to leave a shekel in the bowl for those of lower RPM

Post Reformation but still tempted by the Gods of HP Mammon, guilt has it occasionally remembering its  religious observances, leaves half a shekel.

Completely lapsed, it prays to a pagan God. 9000rpm+ and matching HP from lift and duration of Occult proportions. One must first paint a hexagram on the workshop floor before debauching a motor to sate this abomination’s sinful appetite. Those of lowly RPM are truly forsaken.

Witnessing the excesses and fall of its pagan brother, the 336 strives vainly for perfection though doomed to purgatory as it struggles to retain power while bending to those of lower RPM.  Shuns any suggestion of religious lineage to its bronze age namesake.

Of the New Age prosperity gospel. Speaks in tongue of generously spreading increased bounty to those of all RPM’s. Claims Asymmetry spoken by others is a false God but struggles with Cartesian duality.

Pilgrim Airhead Missionaries failed in having the Gospel of Airhead Torque take root in the New World. Materialism and avarice for HP instead spawned the Devil’s cam, luring the greedy into short lived gratification before revealing its true nature and devouring its host. Long banished and NLA for its sins.

A craven image of the Andrews No.2? Or is it the other way? Either way, they are very similar right down to their destructive nature. As a result, the 330 is also NLA having been banished from the Kingdom of Airheads.

Both created by the same vengeful God. Waring siblings that have been measured and studied, but to speak their names in the Holy Cam Table is to invite litigious wrath. The Holy Cam Diviner has shown Asymmetry – in its true meaning –  to be a false God 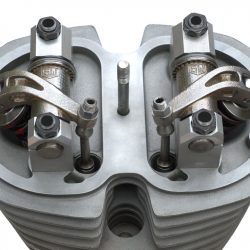