There are two main camps for the spark timing of a dual plugged airhead engine. Both seem in rough agreement that timing should be retarded to about 28 degrees at maximum advance compared to the stock BMW timing specification of 32 degrees. This retardation of the spark (compared to the stock setting) is necessary because – to put it simply- the two flame fronts from two spark plugs get everything happening more smartly.

The two camps may be roughly summarized as follows.

For those who don’t want to fiddle with the innards of the mysterious timing canister or ‘bean can’* or install an aftermarket electronic ignition that caters for dual plugging, there is little choice but to retard the timing at idle from the BMW spec by said 4-6 degrees – close to TDC. This does not change the shape of the timing curve that the stock bean can delivers, but shifts it in its entirety by the same fixed amount across the entire rev range and causes the maximum advanced to be reduced to around 28 degrees.

The ‘S’ mark on the fly wheel (or clutch carrier as the later, lightened items are called) is the stock timing mark at idle and is 6 degrees BTDC. The ‘OT’ mark represents TDC (zero degrees). So, to retard the stock timing by 4-6 degrees, people are timing their machines at idle so that the OT mark is at, or around the center of the timing viewing port.

The stock maximum advance of approx. 32-33 degrees (depending on the model year) is designated by the ‘Z’ mark on the flywheel and occurs at around 3000 RPM with the stock bean can. The retardation that is introduced at idle also shifts the point of maximum advance by 4-6 degrees to appox 27-29 degrees. In which case, you and your strobe may just see the ‘Z’ mark hanging around the very bottom of the viewing port at engine speeds of 3000 RPM and above.

A handy number to keep in mind is that one degree of crank angle corresponds to about 2mm along the periphery of the flywheel i.e. where the various timing marks are stamped.

There is rough consensus within this camp that in addition to retarding the maximum advance by 4-6 degrees, dual plugged engines enjoy curves that are stretched compared to the stock curve so that maximum advance occures at higher engine speeds than stock. Some say 3500 RPM is ok, some say 6000 RPM!

For this scenario, the timing at idle is generally set at around stock (the ‘S’ mark) and the range of advance that the bean can delivers is compressed by our 4-6 degrees in order that the timing at maximum advance is retarded by that same amount. 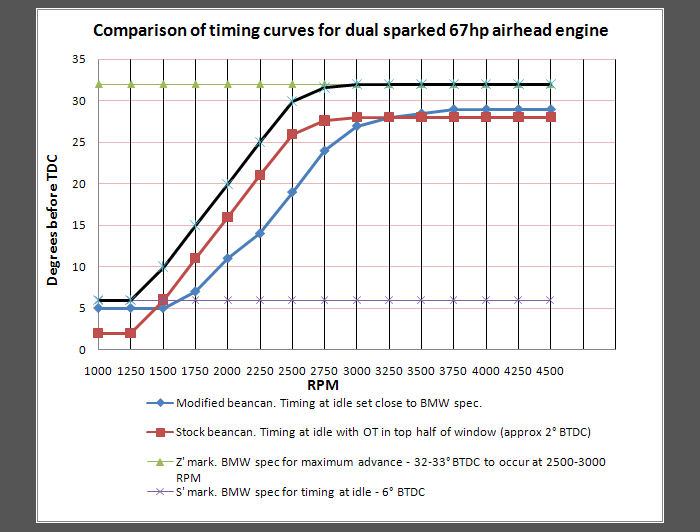 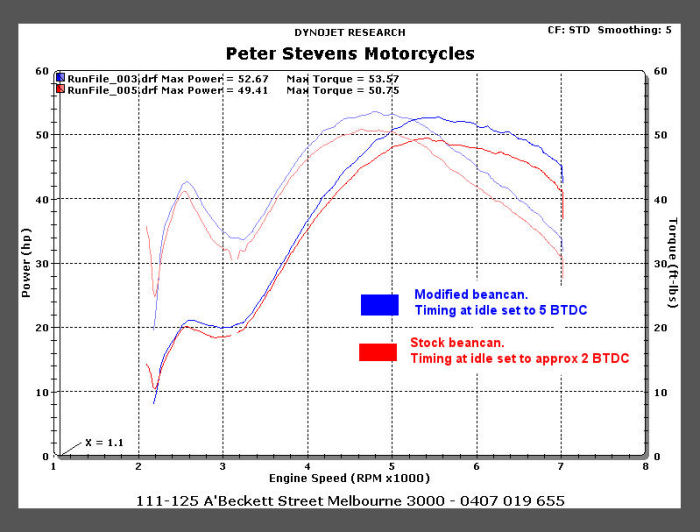