Increasing the compression ratio of luftkopf #1 is long overdue. Aside from being one of the easiest ways of adding horses, the 336 cam wants it badly.

The valve pockets in the piston domes have been deepened to accommodate the higher lift of the cam and I have often wondered what difference this would make to the compression ratio. Not much I suspect but enough to turn my cuiousity into a vaguely unhealthy urge to measure it.

Also, having developed a sceptisim of ‘factory specifications’, if I’m to increase CR, I want confirmation of the starting point.

The result of the process as set out below was puzzling. I got a compression ratio for the bike of 8.2:1 when the bike is supposed to be 9.5:1 ! This translates to a whole 12cc’s of additional volume in the combustion chamber that shouldn’t be there! Certainly far more than could be explained by deepened piston pockets or valve recession due to a fresh valve and seat grind.

Everything has been checked: Pistons, gaskets, heads measured to check that they are indeed 9.5 items. I even went to the extent of using a completely different method of measuring CR in order to verify the first method. This second method showed close agreement with the first and can be found here.

So, my sceptisim of factory specifications is even more justified, but could BMW have duped us to such an extent! Please leave a comment you have had similar findings or can shed some light!

So here’s the first method that I used.  It’s a standard method which I tweeked a bit so that it suits airheads a little more:

This is illustrated in the following diagram: 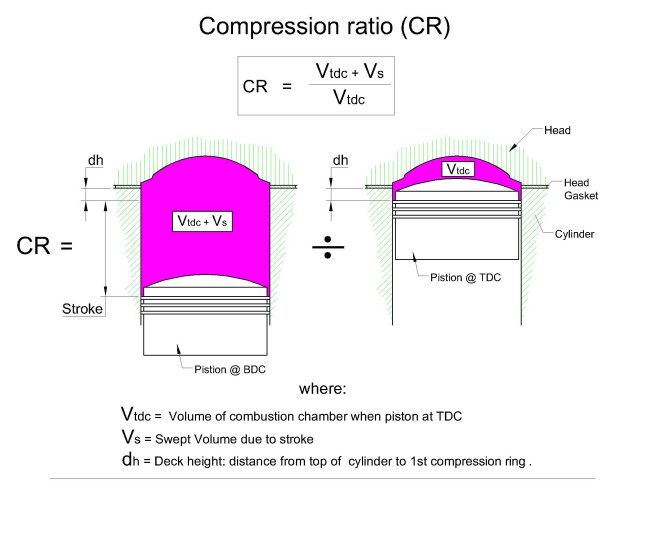 The swept volume, Vs, is easily calculated but not so the complex volume Vtdc. This is worked out with a combination of mathematics and directly measuring a couple volumes with a burette and a suitable fluid.

After researching the various ways that people go about this, I came up with a variation which I think better suits the domed head of the airhead piston and is not too hard to carry out.

The pivital formula is Vtdc = Vg – Vph explained below: 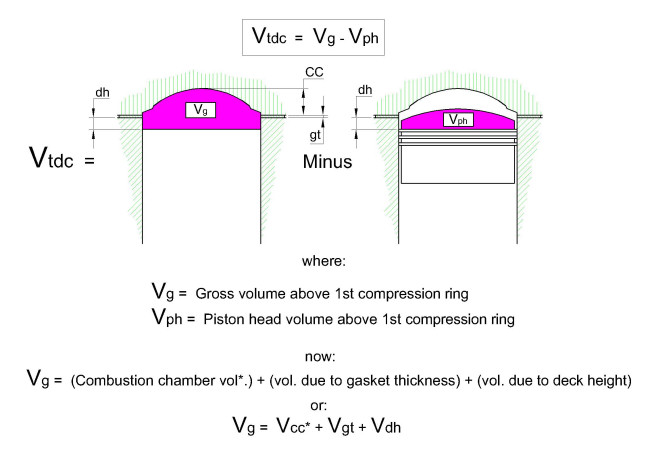 The combustion chamber volume, Vcc is measured directly with a burette. I used a square piece of clear acrylic (plexiglass) about 107mm x 107mm with a 7-8mm hole drilled about 20mm off one side as shown below. With a light smear of grease around the combustion chamber, the acrylic is pressed down firmly so that the grease is squished very thinly and creates a good seal.

The filling side of the head must be tilted up a few mm’s so that the chamber fills towards the hole without trapping any bubbles.

I used straight ATF because I had some on the shelf. But found it a little too viscous. It took some time for the film left on the sides of the emptied portion of burette to settle down to the bottom. After an hour, the level rose by 0.4ml… Other people have used spirits coloured with food dye.

Mind that fluid doesn’t leak past the valves – a light smear of grease around the valve peripheries would help. 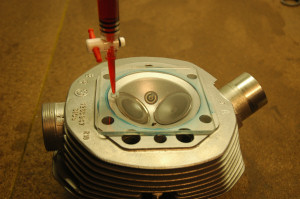 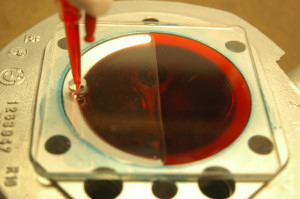 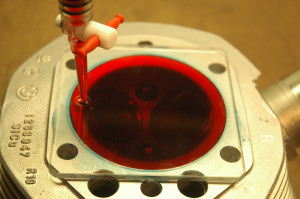 For deck height ‘dh’ I clamped the cylinder to the block using tubes on the studs, moved the piston to TDC and slid a squared off 0.1mm feeler gauge between the cylinder wall and piston so that it rested on the 1st compression ring. A carefully scribed line and vernier did the rest.

If you use this method, make sure you slide the gauge in line with the horizontal axis of the gudgeon pin (ie at 3 and 9 o’clock looking directly at the piston) as this is where piston rock is at a minimum. Also, prussian blue would have helped to make out the scribe line!

The gasket thickness ‘gt’ is measured at several locations with a micrometer or vernier caliper on the bore edge of a used, pre-squished gasket then averaged – I got 0.72mm 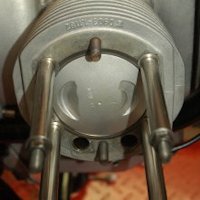 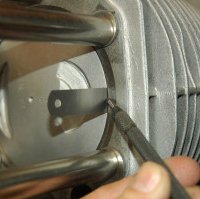 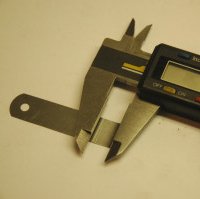 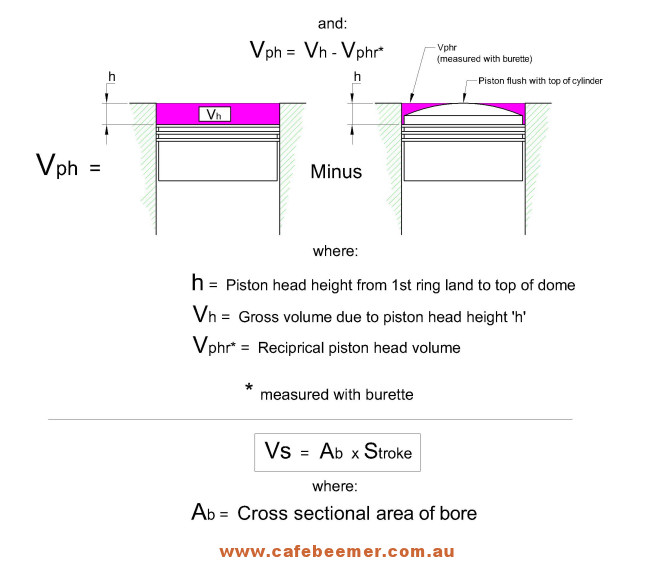 Measuring Vphr is done directly with the burette. A light smear of grease is put around the top compression ring and the piston driven up the cylinder until the piston top is perfectly flush with the top of the cylinder using an accurate straight edge.

At this point the piston head height ‘h’ (from 1st ring to dome top) can be measured in the same way as ‘dh’ above with a squared feeler gauge and scribed line. Thus h = 16.4mm was obtained.

The plexiglass plate is pressed down on its greasy bed with the hole side elevated by at least 5mm and the burette does its job Vphr was measured to be 42.0ml

(BTW: for those not familiar with the metric system, ml = cc)

All the raw data for calculations has now been collected. 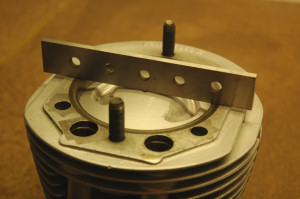 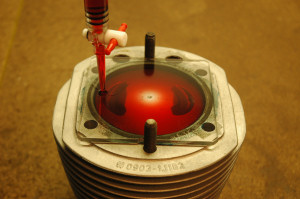 3. Calculations
The calculations below reveal a compression ratio of……8.2 : 1 ?!

Here’s a spreadsheet calculator of the math: calculator (hit cancel if you get a login message) 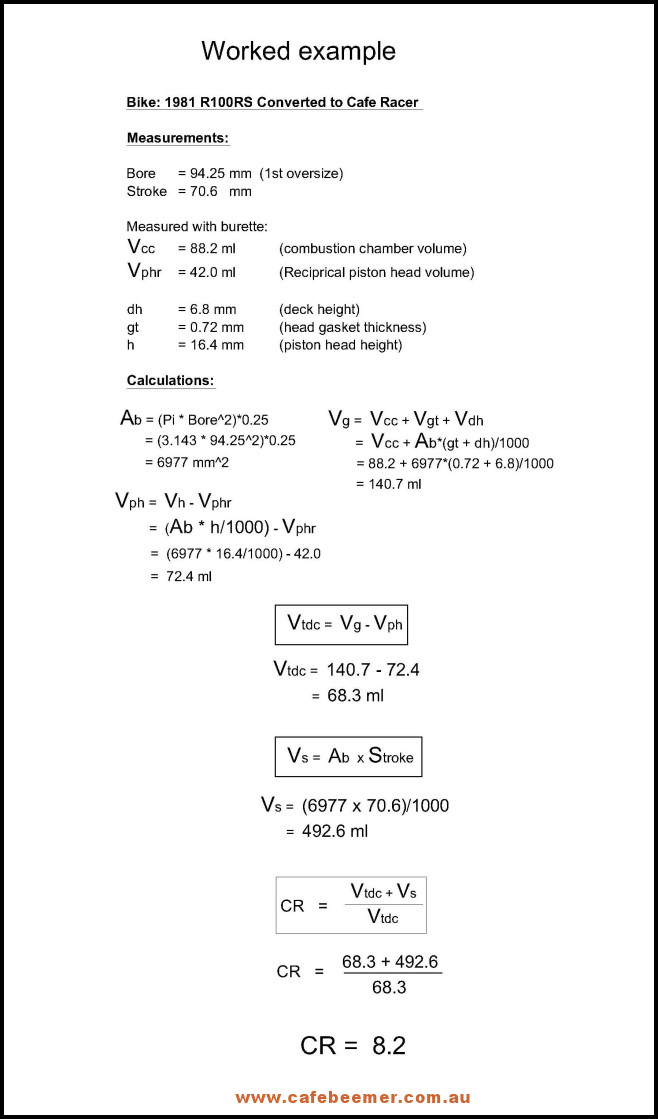 dual plugging – modifying the bean can 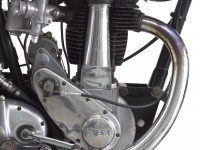 BSA custom B33
Scroll to top