T The salt skrunkracer needs to go faster! More valve lift with high ratio rockers might be one way… But first, some background info:

Those lumps on your motorcycle’s camshaft store a surprising amount of complex information. Each degree of camshaft rotation is programmed with prescribed quantities of lift, along with the lift’s timing, velocity, acceleration, jerk, snap, crackle and pop. Though the last three are generally ignored in cam design. Yep, they are cam-speak for fair-dinkum mathematical quantities!

The relationship between exhaust and intake lobes is also carefully programmed. No one part comes close to influencing as much IC engine behavior as the camshaft.  Small wonder they’re often referred to as an engine’s brains – changing the cam changes the program. In fact, early mechanical computing devices used cams in exactly this fashion.

In a pushrod engine, all cam information is factored by rocker ratio on its way to the valve (see Fig.1). For example, in ideal circumstances a cam with a maximum lift of 10mm operating via a pushrod to a rocker with a ratio of 1.7:1 will yield a maximum valve lift of 17mm. Cam velocity, acceleration and so on are similarly amplified. So, increasing rocker ratio can be effective in a bid for more power potential. However, changing the rocker ratio of an Airhead is no trivial task, which begs the question:

Why not go to the source and increase cam lift instead?

One reason is the limit imposed on cam lift by cam velocity (lift per degree of cam rotation), the maximum of which is dictated by lifter or tappet diameter.  What this means is that for a given lifter diameter, there is a limit to how quickly a cam lobe can open the valve before dropping off the edge of the lifter. For a given cam duration, this plays a part in limiting the maximum lobe lift and therefore the valve lift.

With a diameter of 22mm, the stock Airhead lifter is not too shabby but the Airhead camshaft lobes have an unusually large offset from the lifter center line  (to induce lifter rotation) so the effective lifter diameter under the lobe is reduced to a tad over 18mm. The current crop of after-market performance cams have their lift effectively capped by this reduced diameter. Then there is the matter of higher lift camshafts refusing to negotiate the 40mm cam hole in the tunnel case.

Yes, civil works can be undertaken: machining lifter bores; Making mushroom lifters; Machining cam bearing housings and designing a custom cam to suit. Compelling reasons to instead have a shot at high ratio rockers? Maybe.. but the main reason – as is often the case at skrunkquarters – is that resistance to an interesting design exercise is futile!

The design was developed in Autodesk Inventor – a 3D parametric modelling package.  First step was to accurately map the Airhead engine architecture from the cam to the valve – this is the skeleton on which parts are modeled and placed. See Fig.2

This exercise laid bare the compromises that are made in fitting components into a given engine and chassis configuration while trying to remain as compact as possible – often referred to as packaging constraints. Unlike the idealised valve train in Fig.1 where parts are efficiently in-line and at right angles to each other, the reality is usually quite different. An example is the loss of cam information and stability caused by the seven degree misalignment between lifters and pushrods. Hard core Airhead racers back in the day would remedy this with various labor intensive strategies.

Rocker geometry has quite an influence on valve train efficiency. Again, packaging constraints played its part in having the original BMW engineers depart from geometric ideals for the stock rockers. This high ratio design is no different. In fact, if the experience could be characterised by one thing, it would be the constant battle between design ideals and packaging constraints.

The most commonly cited ideal rocker geometry is the mid lift method as illustrated in Fig.3, where the 90-degree-points occur at 50% lift. I.e. The points where both the valve stem and pushrod are perpendicular to their respective rocker lever-arms should occur at mid lift.  Importantly, a 90-degree-point marks the position where the valve or pushrod axis are tangent to the arc swept by their respective lever-arm. 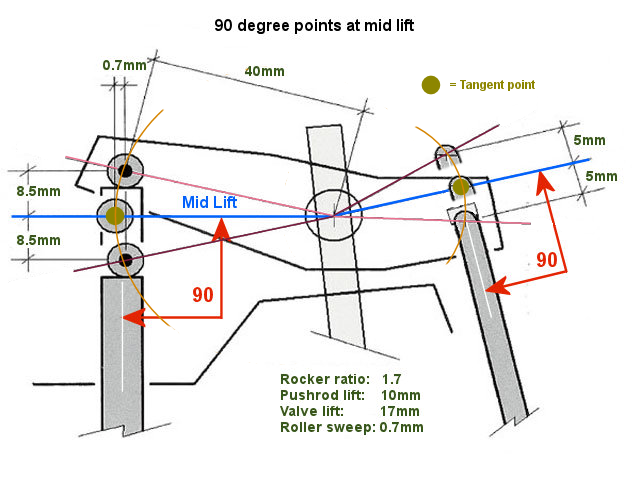 In terms of minimising the loss of cam information, this is the most efficient arrangement. The reason hinges on the fact that rocker ratio is not constant as implied by a rocker’s single number ratio specification. This number is generally the maximum ratio that the rocker achieves through its arc and coincides with the 90-degree-points or points of tangency.  When both the pushrod and valve 90-degree-points occur at mid lift, the average rocker ratio is maximised while minimising roller or pad sweep across the valve tip and the pushrod’s transverse deflection  –  important considerations for valve train wear and stability.

Just how sensitive is performance to moderate deviations from ideal mid-lift rocker geometry? The broad answer is not much and will go unnoticed until the zeal for power focuses attention on the cumulative effects of smaller engine tweaks – usually the preserve of higher end racing.

Even then, when upping the anti, a more important rocker design consideration emerges, one that will relegate incremental-power-increase to optional-fringe-benefit, and that is valve train durability and stability.

Jesel, for instance, has a different take on ‘ideal’. They recommend that their aftermarket performance rockers are setup at around 2/3rds lift, also known as a low pivot geometry: The valve side 90-degree-point should occur at 2/3rds lift rather than mid-lift. While this strategy increases the overall valve tip sweep, the bulk of the sweep occurs at lower lifts when spring force is relatively low and is minimised around the center of the valve tip when the spring force is highest. As it turns out, this airhead high ratio rocker exercise ended up with something similar, not by design, but due to packaging constraints – more on this later.

Robust valve train design – particularly for high rpm applications (such as salt racing) – is the defining design consideration in how much cam aggression one can get away with for a given red line. Asking an unwary valve train to deal with increased loads and accelerations as it flies apart is rather inconsiderate.

So, there is more to the design of this high lift system than just the rocker.

The rockers were originally designed for CNC manufacture in 7000 series aluminium alloy. Then, a chance meeting made an otherwise inaccessible technology available: Additive Manufacture (AM) in Titanium (Ti). Bless the guys at Zenith Tecnica  for this was a quantum game changer. The limitations of CNC machining and low tensile and fatigue strength that make aluminium designs so chunky, gave way to a lean design where a high strength material could be optimally placed along load paths in order to maximise strength to weight ratio. 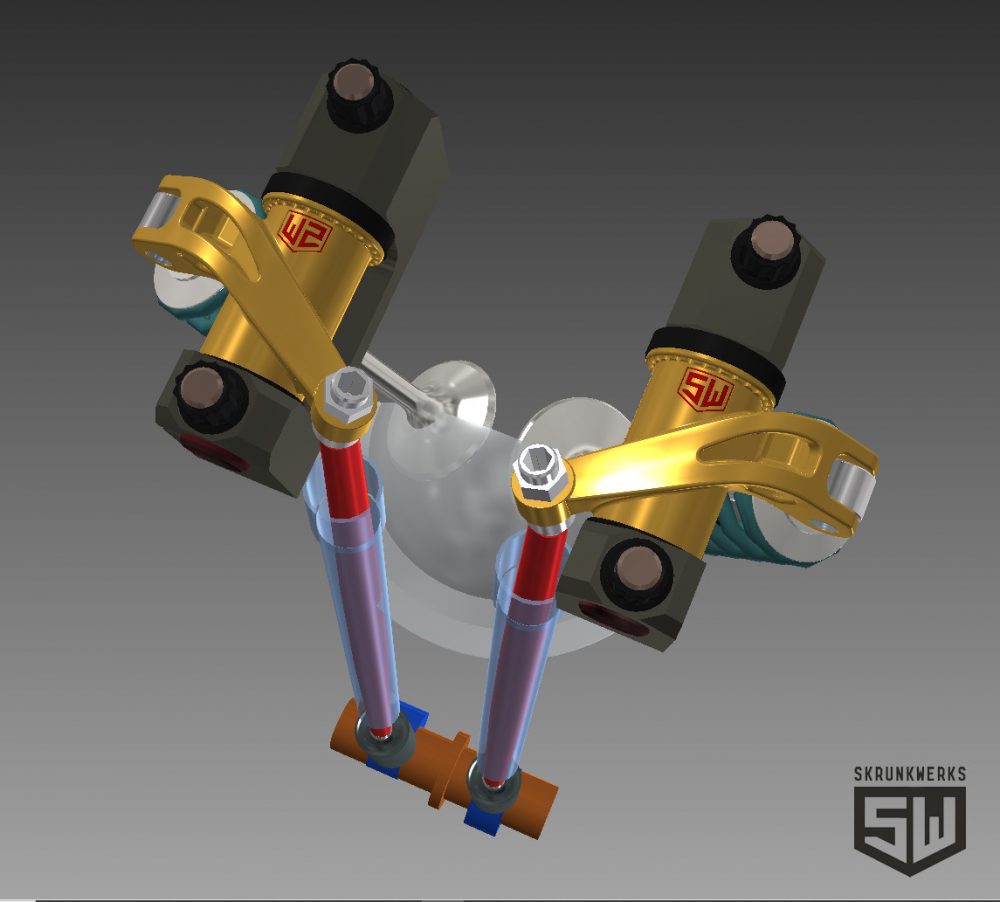 The AM process employed by Zenith Tecnica is called Electron Beam Melting or EBM. Together with a post-process called Hot Isostatic Pressure (HIP), the resulting ‘printed’ mechanical properties are comparable with those of billet material. The process is routinely used to manufacture highly stressed components in the aerospace industry.

The Ti alloy used in the EBM process has a strength approaching tool steel while about 42% lighter. Even with the addition of the tip roller, the finished design is around 40% lighter than the stock item and importantly, posts a 25% reduction in polar mass inertia – that alone is worth 200-300rpm to the red line (other things being equal). All this while dealing with 38% higher spring forces that are required for this high lift system.

The design process was iterative: A preliminary rocker design was combined with all the valve train components (based around a Schleicher 340 cam) in order to calculate spring specifications which then fed back into the rocker design and so it went until a final geometry was settled upon and Finite Element Analysis confirmed the design was up to the task for the final rocker ratio and red line of 9200 RPM. See Fig 5. 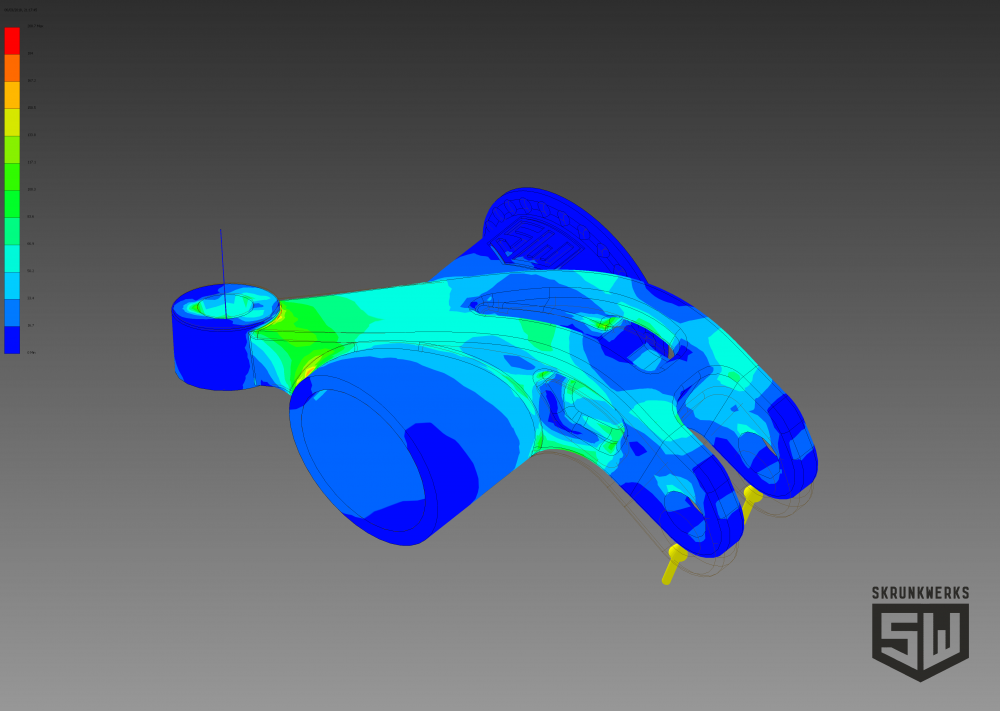 As mentioned earlier, making everything work within the constraints of the underlying BMW architecture was a constant juggle. For example, with the taller springs and longer valves needed for the additional lift, ideal rocker geometry per Fig.3 could not be accommodated under the stock rockers covers. Broadening an already beamy, tarmac scraping bike was not an option. Custom rocker posts were designed to lift the stock shaft position as high as possible under the stock rockers and a little closer to the pushrods. In this way, a final maximum rocker ratio of 1.62 was achieved while retaining a low pivot ‘Jesel’ geometry similar to that discussed in section 4.

The stock rocker ratio is 1.39 which yields a gross valve lift of 12.2mm with the Schleicher 340 racing cam. The high ratio rocker bumps this up another 2mm to 14.2mm – a massive 4.8mm over the bog standard setup. It is doubtful that his could be achieved under the stock covers with chunkier Aluminium designs.

On that front, the dynamic nature of the model came to the rescue. With the 340 cam accurately modelled, the motion of the entire valve train can be animated to check things like valve clash as the design progressed. The animation here  shows how the valves cosey up in the final arrangement when passing each other at overlap. That’s about 1mm clearance between the valves. 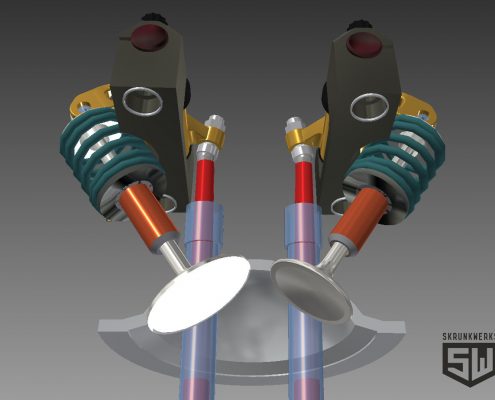 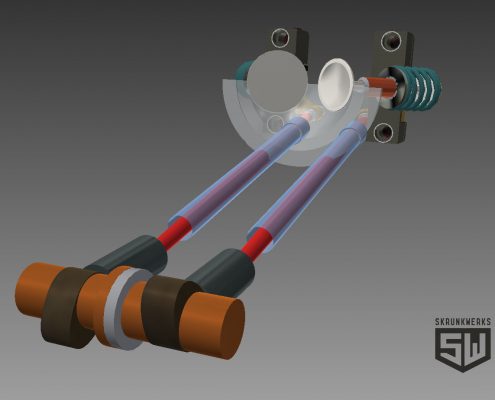 Additive Manufacture of the rockers was followed by machining operations for features requiring accuracy such as the bearing bore, roller housing and adjustment bolt. The finished assembly is shown below.  Precious few stock parts remain in the valves train. The stock pushrods shown below will be replaced with custom aluminium tapered items as shown in the model. 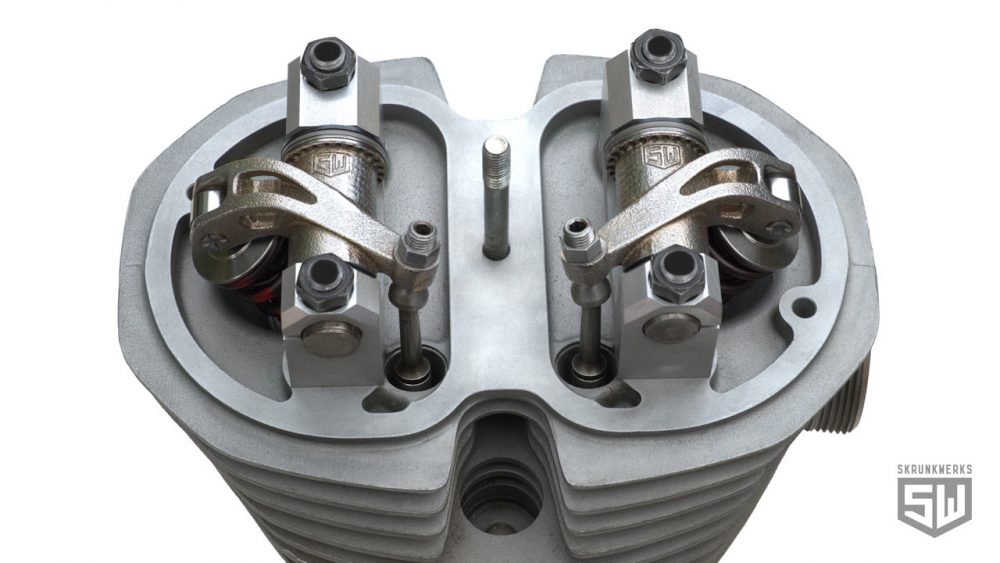 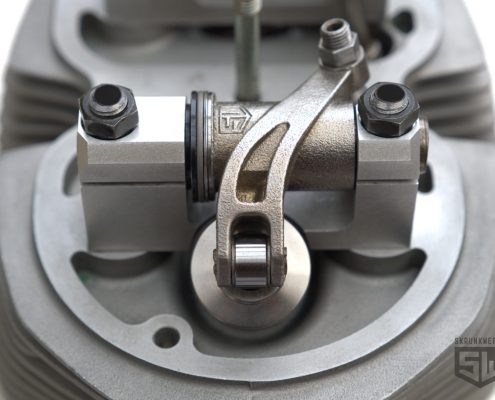 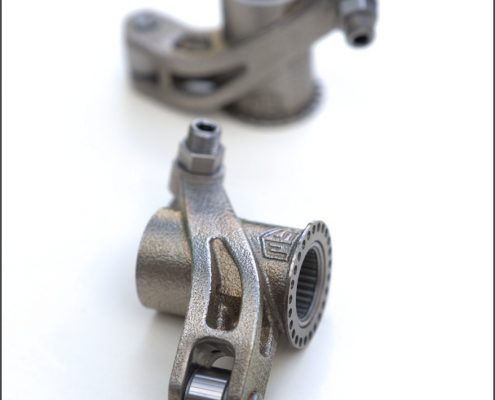 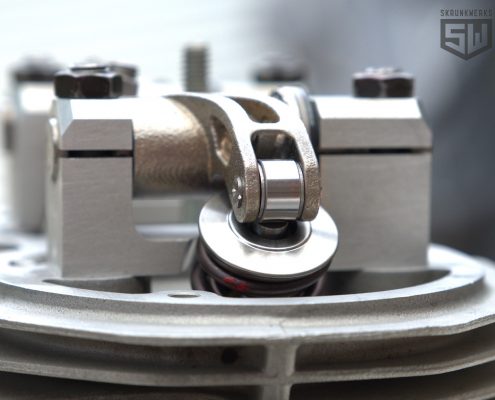 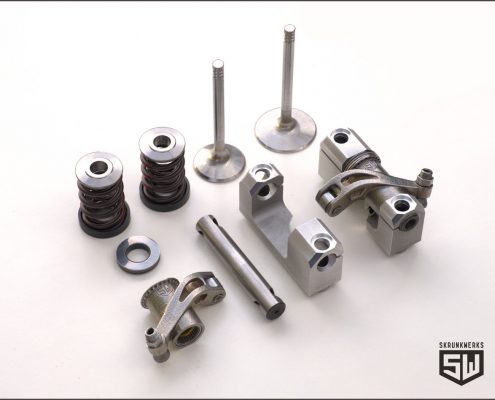 They sure look purdy perched as they are on a disembodied head, but smug satisfaction will have to wait until they’re properly skrunked: Proving themselves in a motor tearing across Lake Gairdner!

Also, there are other considerations that will need some attention before this design can be wrapped up:

While not affecting the advertised duration of the Schleicher 340 cam, its duration is increased just about everywhere else to varying degrees.  This has the effect of increasing the already large overlap area of this cam to a point where things could go backwards. At least, that’s what engine simulations are indicating.

A new cam design is being looked at, one with this high ratio rocker specifically in mind. A bit more lift might be snuck in along the way.. which leads to the next consideration: How much lift is good lift?

More lift doesn’t always result in the power increase that one might expect, there’s a whole bunch of reasons for this to do with piston demand and how well you can get intake tracts and exhausts to perform. Also, the Airhead with its hemi chamber, large included valve angle and the need for domed pistons will trade increased lift for compression ratio resulting in ever decreasing returns.

Then there is the ever present specter of grenading the valve train. Without a spintron, there’s no choice but to test in, and possibly sacrifice a living breathing engine.

(If you haven’t already, check out the movie here) 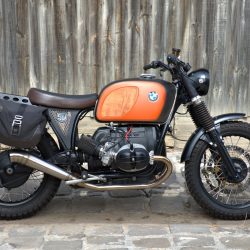 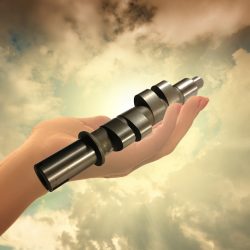